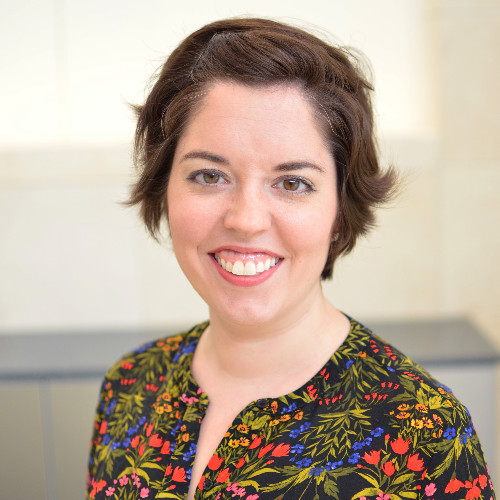 In her new position, Liz focuses on growing the alumni career network by connecting current students and alumni with other alumni, parents and friends of the College in the fields and geographic locations in which they are interested. Her position and her motivated personality enable her to pursue her passion: helping others flourish at Rhodes.

“I like connecting people and helping them succeed,” she says. “So if I can introduce you to someone who can help you further your career, that’s what I love to do.”

While a student at Rhodes, Liz studied English literature, an interest that began in a First-Year Writing Seminar with Prof. Rebecca Finlayson. Between enjoying the campus from the perspective of the Barret Library quad and the social encounters that made her college experience memorable, some of her most formative experiences came in the classroom.

For example, Liz vividly remembers a particularly passionate debate in a class led by Prof. Steven McKenzie. She and another student argued polar opposite ends of the debate, but left the classroom on her way to get coffee with the very student with whom she most disagreed. Knowing that she could disagree with a peer and still build a relationship outside the classroom characterized her experience at Rhodes, an experience she seeks to facilitate today for current students.

After graduation, Liz moved to New York City. “I had two thousand dollars, an apartment, and no job,” she says, but she felt that she needed to venture out of her comfort zone.

Liz was drawn to New York because of her interest in theater promotion, but she took a job working at a bicycle shop and commuted six miles into the city every day. She loved working in a city like New York, as it exposed her to a world and new experiences she had not grown up around.

“I grew up in a small town in South Mississippi,” she says, “so New York was so different from what I’d been exposed to.”

Liz is thrilled to be back in Memphis. Her favorite part of the city varies from day to day, from barbecue nachos to running through Overton Park. Above all else, however, a constant is her love for Rhodes College and contributing to the campus community wherever she can.

“Rhodes has done so much for me as a person,” she says. “I want to do what I can to make Rhodes as well-known as we all think it deserves to be.”

So much has changed since Liz Moak was a student at Rhodes, but she still finds immense comfort in being back on campus. For Liz, the buildings and campus spaces may change, but she believes Rhodes itself has nowhere to go but up.

“People should know how wonderful this place is,” she says. “This year, I’m organizing networking events, but I’m also doing research on where people are going after they graduate. I am considering doing events in places we haven’t traditionally done them to give people everywhere the opportunity to connect with Rhodes College.”

In her new position, Liz works in King Hall and welcomes interactions and conversations with current students and alumni. She can be reached at moake@rhodes.edu.