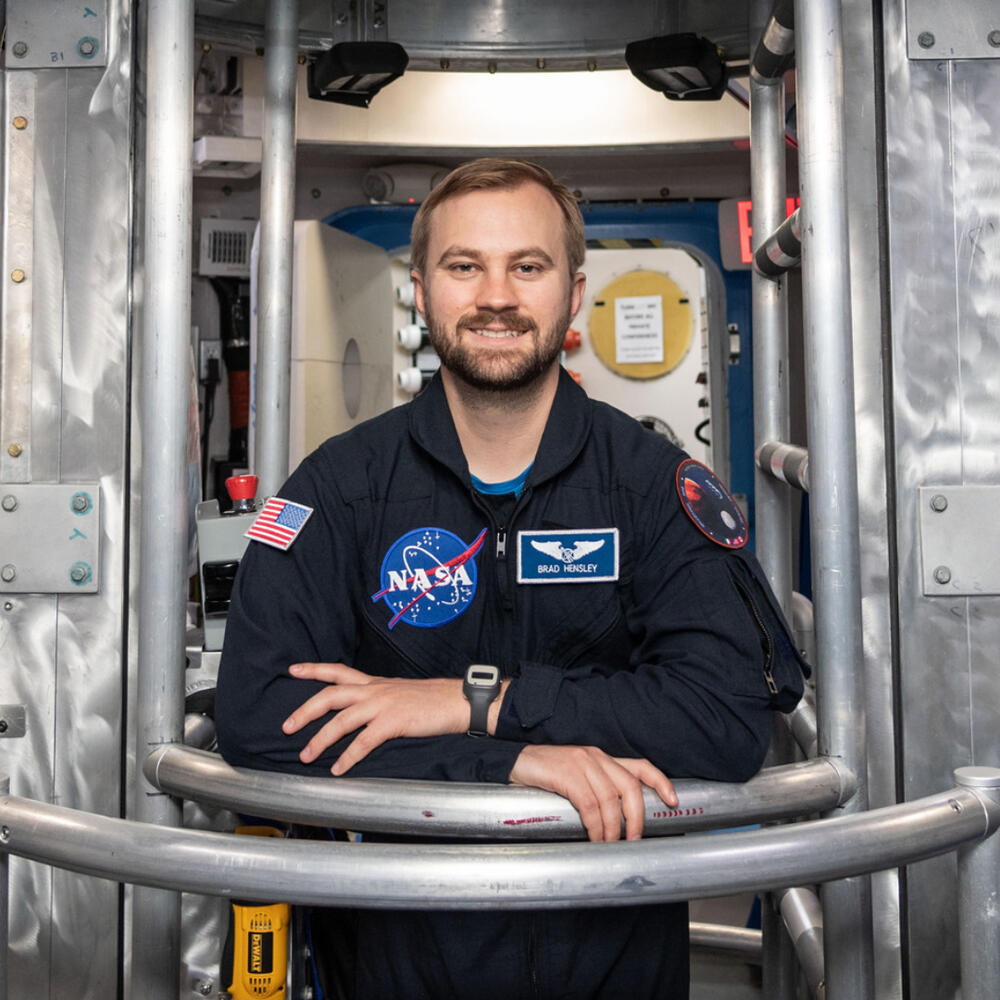 After graduation, some Rhodes alumni stick around Memphis, developing their roots in the historic city. Others go far, exploring the world and their career paths. For Brad Hensley ’12, a recipient of this year’s Young Alumni Award, not even the sky’s the limit; he has his eyes set on the space beyond Earth. His studies led him to being selected by NASA for their project HERA, a simulated mission he took on with three other members. In his preparation to “leave earth,” Brad took himself around the country, utilizing his aerospace and outdoors skills to engineer technology, educate, and even rescue others.

Brad graduated from Rhodes with a double major in Biology and Physics, as well as a minor in Mathematics. Today, he still works with the Rhodes Physics Department as a teacher and advisor. After providing a few rounds of advice on a project in Fall 2021, Brad’s role evolved to being a teacher, where he focuses on sharing his experiences with current Rhodes students. This brought him closer to many remarkable professors Brad had during his time at Rhodes; to name a few, he fondly remembers Dr. Brent Hoffmeister, Dr. Shuhbo Banerjee, and Dr. Michael Collins.

As Brad’s time at Rhodes was ending, he was looking at all sorts of careers, such as biomedical engineering and research opportunities. Then he worked on a NASA moon buggy competition, which he was “dragged to by a friend.” He also worked with Dr. Hoffmeister on the project. The competition involved designing his own moon buggy and measuring its efficiency against the other competing models. The competition sparked Brad’s interest in aerospace engineering, which further inspired him to attend University of Colorado Boulder for graduate school. At CU Boulder, he utilized the strong foundation of skills he developed while at Rhodes. He described this foundation as a “pyramid” and describes it is a crucial and exceptional aspect of Rhodes’ liberal arts curriculum.

At CU Boulder, Brad’s aerospace engineering skills became fully utilized. He expanded on his Rhodes education with real experiences in an engineering field. His passions also took him to the outdoors. He started training for a mountain rescue team, taking him throughout the gorgeous, but dangerous, mountains in Colorado. He’s been involved in more than 140 search-and-rescue missions since 2016. Brad even completed Level 1 avalanche training in Washington State; if Colorado was out of the picture, Brad said he’d be happy settling down in Washington with his fiancé. In Colorado, he also pursued his hobby for playing chess, which he picked up while at Rhodes. He claims to be ranked around 300th in the state but isn’t confident in his abilities to defeat former Grand Champion Magnus Carlson.

Clearly, Brad had accomplished quite a bit at his young age, and despite his love for his work, Brad was looking for something different. His attention turned towards NASA’s project HERA, a 45-day simulated mission to Mars. The selection process for this four-member team was more than rigorous; Brad underwent more than 1000 psychological tests and examinations, measuring not only his individual mental capabilities and health, but his ability to cooperate with the other team members. Brad’s time with NASA wasn’t just a sabbatical from his life, it was a vital steppingstone towards achieving his future goal: to become an astronaut. At the moment, he is preparing astronaut applications and working towards bringing his simulated mission to life.

While Brad’s accomplishments denote him a winner of the Young Alumni Award, his character and dedication to his craft is even more remarkable. Even during the process of becoming an astronaut, Brad finds time to tend to his alma mater, further enriching the educational opportunities and experiences available to current students. His immense amount of carefully cultivated skills are a prime example of what the Rhodes liberal arts curriculum works to develop.