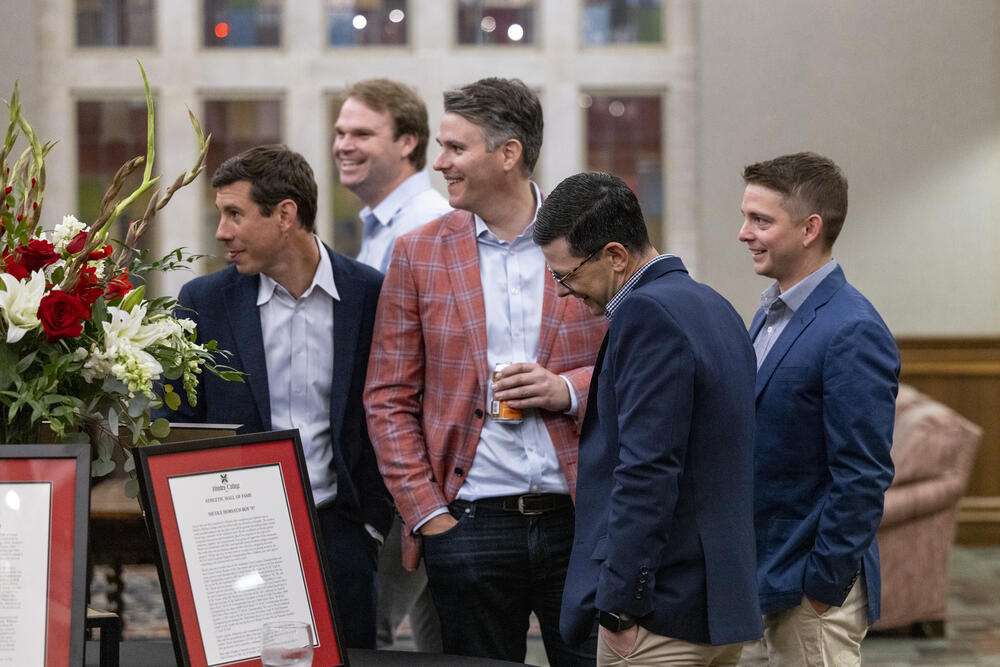 Desmond is the epitome of a well-rounded student-athlete who embodies the elements of success on and off the field. As an athlete, scholar, and campus leader, he stands for everything Rhodes College represents.

Desmond was a 3 Time All-Conference athlete and the Conference Defensive MVP.  He holds 2 All-Southern Region and All-American titles and, in multiple years, received All-SCAC First Team Defensive Player of the Year. He was named to the SCAC 30th anniversary football team.

Rhodes is honored to induct Desmond Hendricks into the Rhodes Athletic Hall of Fame.

Robert's stats, records, and achievements tell most of the story, but he, along with fellow Hall of Famer Daniel Vanaman, changed the culture of Rhodes Baseball. Before his arrival in the fall of 2005, the baseball program had only one season over .500 in the past two decades. Robert was part of Coach Cleanthes first recruiting class that went on to win 28 games in 2006, 36 in 2007, which is still a Rhodes record, and 28 in 2008

Robert holds the record for most career wins at Rhodes with 3; other accolades include All SCAC 1st team 2006, 2007, and ABCA All-American in 2007.  In the SCAC, he is 5th all-time in wins, 6th all-time in strikeouts, and 3rd in most wins in a season. In 2006 he set the single-season win record with ten wins and a new record with 12 wins during the 2007 season. Following the record-setting season in 2007, Robert was named to the ABCA 1st Team All-South Region.

Rhodes is honored to induct Robert Flanagan into the Rhodes Athletic Hall of Fame.

William Henry is the epitome of what it means to be an Athletics Hall of Fame inductee. A four-year starter in football, a repeat all-conference selection in track & field, a team captain in both sports, and a Rhodes College Male Student-Athlete of the Year, William is truly a Hall of Famer.

William’s All-Conference Selection in football is coupled with 10 All-Conference Selections in track. In 2001, he set the conference record in the 100m dash for the next eight years. The school record he set in 2001 for the 100m dash was held until 2015. The dedication and determination of being a dominant 2-sport athlete were not lost on his peers as William was named team captain in both sports.

Rhodes is honored to induct William Henry into the Rhodes Athletic Hall of Fame.

If anyone is responsible for turning the fortunes of Rhodes Softball, it is Rebekah Moore McFarland. Before her arrival, Rhodes had won just 1 SCAC game in the past three seasons and had only 14 total wins in 3 seasons. Rhodes won 21 softball games five years before Rebekah's arrival and did not make the SCAC Tournament. During her first year, the team went 22-15 and finished second in the SCAC.

For four seasons, she was undoubtedly one of the most feared power hitters in the SCAC and was the career leader in HR with 28, in RBI with 137, and second in career walks with 51. The 2009 team set the single-season record for wins and finished SCAC Runner Up. Two top four-season win totals in Rhodes Softball history occurred during her career (’09, ’10).  During her career, she averaged .346 at the plate, and in the field, she made only eight errors during her four seasons.

Rhodes is honored to induct Rebekah Moore McFarland into the Rhodes Athletic Hall of Fame.

After an 8th place finishes in the 2006 NCAA Division III tournament and junior John Jennison’s runner-up finish, the expectations were high for the 2006-07 Rhodes Golf Team.  The Lynx did not disappoint, winning the SCAC championship by three strokes over DePauw, with five players finishing in the top 10.  Coach Bill Cochran was named the SCAC Coach of the Year, and Doug Gordon’s 2nd place finish earned him SCAC 1st Team honors.

The 2006-07 Golf Team members set a standard of excellence for future Rhodes Golf teams to aspire to.

Rhodes is honored to induct the 2006-07 Men’s Golf Team into the Rhodes Athletic Hall of Fame.

Nicole transferred to Rhodes after competing in her freshmen year at Baldwin Wallace College. The women’s track and field program was just three years old and making strides toward becoming a contender at the conference level. Nicole’s work ethic and no-nonsense approach were infectious, energizing the entire program. Within one year, the Lynx went from an average team to placing 2nd at the NCAA South/Southeast Regional Championship Meet.

Rhodes is honored to induct Nicole Horvath Roy into the Rhodes Athletic Hall of Fame.