Patrick Gray is Professor of Religious Studies. He received his Ph.D. in religion from Emory University. Previously he has taught at Emory and at Oglethorpe University, as well as in Japan. His research focuses on the Greco-Roman context of early Christianity and the history of biblical interpretation. In 2013, he was awarded the Clarence Day Award for Outstanding Research and Creative Activity.

The Routledge Guidebook to the New Testament. New York: Routledge, 2017.

Paul as a Problem in History and Culture: The Apostle and His Critics through the Centuries. Grand Rapids: Baker Academic, 2016.

Teaching the Bible through Popular Culture and the Arts. Co-edited with M. Roncace; Resources for Biblical Study 53. Atlanta: Society of Biblical Literature, 2007.

Godly Fear: The Epistle to the Hebrews and Greco-Roman Critiques of Superstition. SBL Academia Biblica 16. Atlanta/Leiden: Society of Biblical Literature/Brill, 2003. 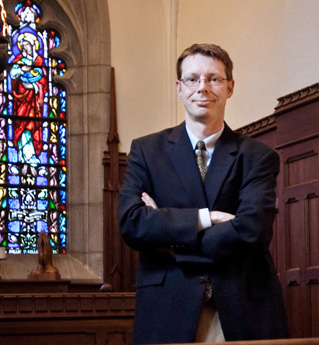