The Cognition and Aging Lab aims to better understand how humans produce language, with specific emphasis on factors that influence spoken and written word retrieval in younger and older adults. Producing language is deceivingly complex, relying not only on linguistic processes such as access to a word’s meaning and sounds, but also on cognitive resources such as attention. We therefore also investigate how language production is supported by other cognitive processes such as memory and attention, and how engagement with emotion influences word retrieval and language fluency.

We employ diverse research methods to study language production, including experiments where participants produce language under certain constraints (e.g., when distractors are present) and studies where speech is measured in more naturalistic communicative settings (e.g., where participants share narratives about events in their lives). Below are descriptions of specific research topics, with links to associated articles.

A major goal of the lab is to train the next generation of scientists, and therefore undergraduate researchers are involved in all of the projects described below. Lab alumni use their research training in a variety of ways when they leave Rhodes: Many recent alumni have pursued PhDs in psychology (including clinical psych, neuropsych, geropsych, I/O psych, social psych) or entered professional programs in various health professions (MD, PharmD, Speech Pathology, PT, PA, NP).

When the hands communicate:

In collaboration with colleagues in the Cognitive Science program at Pomona College, our newest project aims to explore multimodal communication, specifically the role of gesture during speech production. We intend to answer questions about how and when younger and older adults use gesture to facilitate communication, as well as how factors such as emotional content influence gestures and affect speech fluency.

Although language production often appears to occur without much effort (e.g., words seem to “roll off our tongues” in everyday conversation), the process becomes particularly frustrating when we find ourselves at a loss for words, especially when we want to produce a specific word that just won’t come to mind when we want to use it. This experience is known as a tip-of-the-tongue (TOT) state, which occurs when we cannot recall a known word. With TOT states, the meaning of the word is known, but the word’s sounds are temporarily inaccessible, often as a result of non-recent or infrequent use of the word. Furthermore, access to speech sounds decreases with age, resulting in an increase in TOT states in older adults. Examples of publications from this research include:

Although considerable research has been conducted on speech errors, or “slips of the tongue," little research has investigated comparable errors in written language production, or “slips of the pen.” Speech errors are widely used as tools to understand the processes underlying spoken language production and to investigate the roles of phonology, morphology, semantics, and syntax in production. We designed a new methodology to study slips of the pen where we experimentally induce written errors. Using this methodology, we have investigated how phonology, semantics, and syntax influence written errors, showing that orthographic errors can parallel phonological errors in many respects. Example publications from this research include: 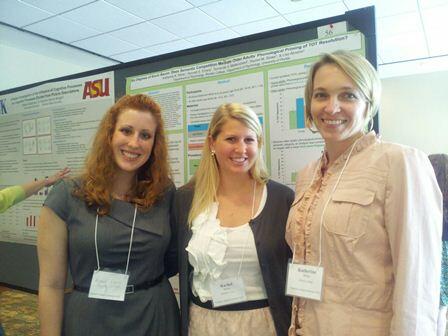 Hannah Emery ’12 and Rachel Stowe ’12 and Dr. White present their research at the 2012 Cognitive Aging Conference in Atlanta. 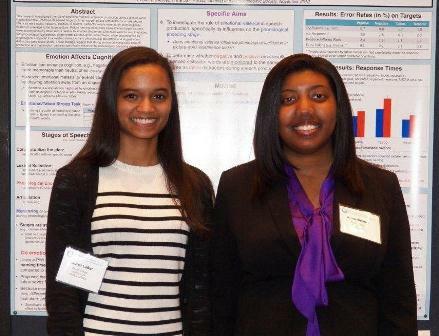 Lauren LaBat ’13 and Anne Rhynes ’13 present their research at the 2012 Meeting of the Psychonomic Society in Minneapolis. 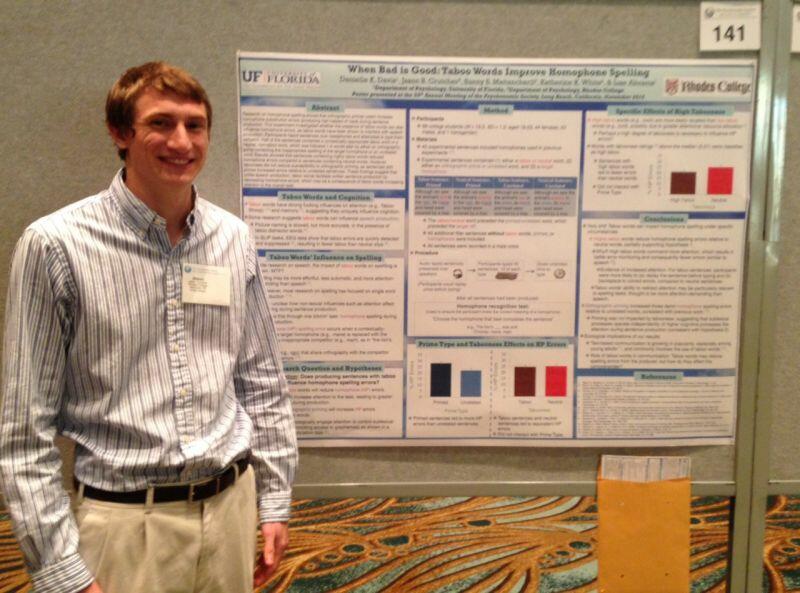 Jason Crutcher ’15 presents his research at the 2014 Meeting of the Psychonomic Society in Long Beach, CA. 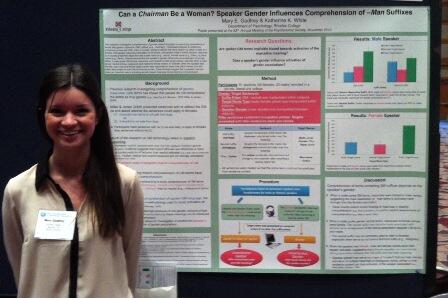 Mary Godfrey ’13 presents her honor’s research at the 2012 Meeting of the Psychonomic Society in Minneapolis.