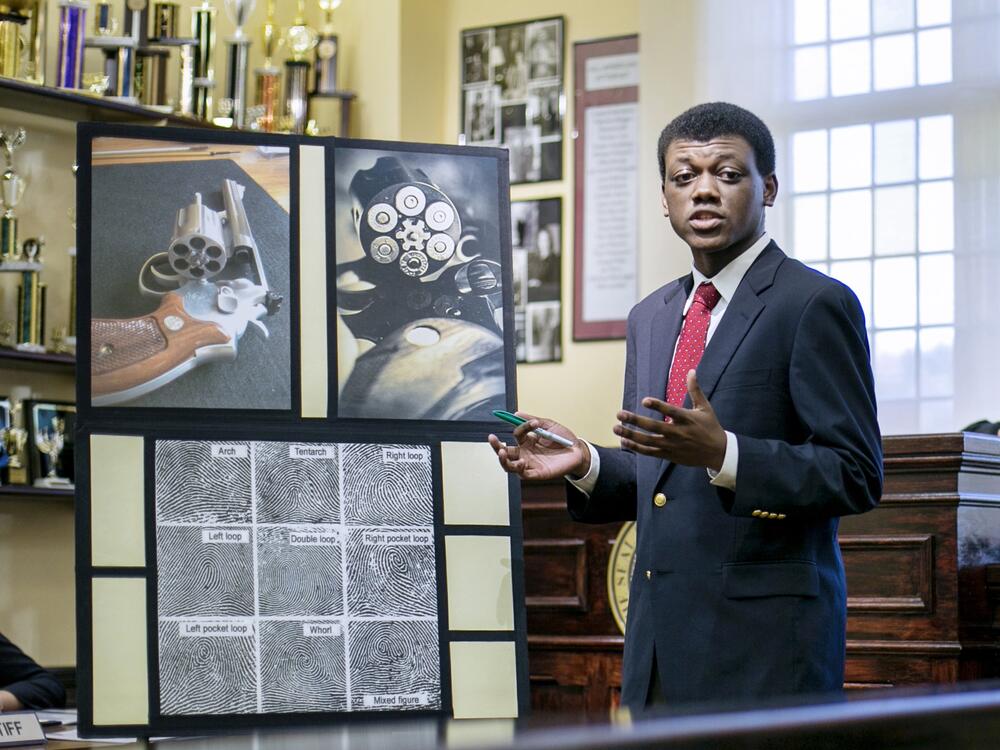 The Rhodes Mock Trial program has set a standard of excellence typical of many programs at the college. Mock Trial began at Rhodes in 1987, when the national tournament consisted of only 56 teams. Since that time, the tournament has blossomed to include more than 650 teams. In the years that Rhodes has competed, we have created an impressive name for ourselves. We have placed more than 25 teams in the nation′s top 10, and also hold the current record for consecutive national championship tournament appearances at 33 years. In those 31 years, only once did we not finish with at least an Honorable Mention. We have made it to the national final round nine times and have won the national championship on four separate occasions. We are one of the only four schools to have won consecutive national titles and are the only school to have twice accomplished that feat. Rhodes also has earned more than 120 All-American awards, given to students who have excelled in their particular roles at the National Championship Tournament.

Rhodes Mock Trial Strives for excellence in every component of the competition. In doing so, each individual will be challenged to improve the limits of his or her ability. We strive to compete fiercely while also maintaining a high degree of integrity and collegiality.

Our competitive goal continues to be to win both our regional qualifier and the national tournament. Given the ever-increasing quality of the competition and the inevitable subjectivity of scoring, we cannot stay dominant if we are simply good. We have to strive to be so clearly superior that no judge can possibly give a round to the other team. At the 1994 and 1996 National Championship Tournaments, our top team did not lose a single ballot, winning 22 of 22 ballots. In 2017, none of our five “regional teams” or two “open round championship teams” lost a single round out of 28 separate rounds. Currently ranked #3 in the nation out of more than 650 teams, our top national team is a prominent force in collegiate mock trial.

In the classroom, students receive instruction from professors who not only hold Doctorates in Political Science, but who have pursued legal studies at the graduate level and through later research. Such legal research has included a reference book on civil rights law, work on municipal charters, and comprehensive work through criminal justice agencies. Professors have received grants through the Department of Justice for projects in which students have been able to participate. These have included studies of the effect of mandatory sentencing on drunk drivers, pretrial dangers, pretrial release and money bail, and the relationship between drug use and pretrial crime.

Educator coach Marcus Pohlmann founded the Rhodes Mock Trial program in 1986 and continues to actively coach the team. He has had the good fortune of being assisted by highly talented local litigating attorneys, most of all whom were themselves former members of the college′s mock trial program. Anna Eldridge, the program′s Director and primary attorney coach, competed at Rhodes, attended Duke Law School, has practiced civil and criminal law in both large and small firms, has coached at both Duke and Rhodes, and now she serves as an Instructor of Political Science at Rhodes offering a variety of law-related courses. Theater professors as well as physicians and other professionals from the area also regularly work with the teams.

Prospective mock trial participants begin by taking Political Science 262: Trial Procedure. Besides learning basic trial elements and the Federal Rules of Evidence, the students also join with returning mock trial participants to form practice teams for in-class practice rounds. If ultimately chosen to continue, students compete in a series of intercollegiate invitational tournaments from October through January. Thereafter, the college′s "regional teams" are chosen and compete at regional qualifying tournaments in February, with the goal of qualifying for the national tournament in April.

Thanks to the generous gift of a former mock trial participant, Rhodes has been blessed with a practice facility unmatched outside of a well-equipped law school! This beautiful and functional practice courtroom allows in-class round to occur in a more realistic setting, facilitating a better working understanding of how to try a case in an actual court room. It is also used for practice sessions by the college′s intercollegiate teams.

The Rhodes Mock Trial program attracts a wide variety of students from virtually every major on campus. Some are preparing for law school, while others simply enjoy the excitement of the competition and the camaraderie that such team activities generate.

Students interested in attending law school may choose to take advantage of law-related internships. Rhodes students working as legal interns for a law firm may attend trials with supervising attorneys, interview potential witnesses, and so legal research. Internships have included the offices of both the prosecutor and public defender, probation, parole, and many others. In addition, internships also have been available in the local offices of elected representatives, with interns working on special projects, responding to constituents, and interacting with staff members in Memphis, Nashville, and Washington, D.C.

For those continuing in the law, the college has enjoyed a law school acceptance rate of better than 90 percent. This far exceeds the national rate of 70 percent reported by the Law Council. Increasingly, law schools look for well-rounded applicants who have been involved in activities such as mock trial. Recent law schools attended by Rhodes Mock Trial alums include Virginia, Harvard, Georgetown, Duke, Texas, NYU, Chicago, Columbia, and Vanderbilt. Beyond law school, our students have clerked for numerous federal judges, including a clerkship in the United States Supreme Court. They have ultimately settled into private practice, as well as working for county attorneys, prosecutors, public defenders, and attorney generals, only to name a few career paths chosen.

Those student not proceeding to law school have pursued careers in fields such as business, industry, governmental service, the military, and academia. They have held positions such as research analyst, professional athlete, real estate manager, political party field coordinator, fund raiser, and professional musician.