Stephanie Elsky received a Ph.D. in English from the University of Pennsylvania and joined the Rhodes faculty in Fall 2017. Her research and teaching focuses on the poetry, prose, and drama of the English Renaissance (c.1500-1700). She is particularly interested in law and literature; the history of political thought; gender and women’s writing; the origins of colonialism; the reception of the classical past; and the history of the material text.

Prof. Elsky first book, Custom, Common Law, and the Constitution of English Renaissance Literature, was published by Oxford University Press in 2020. It argues that the concept of custom, the basis of England’s common law, sparked a startling array of literary experiments in sixteenth-century England and Ireland, including genres such as utopian fictions, romances, and stage drama; imitations of classical meter; and the use of rhetorical figures. Custom ironically justified change in a period when innovation was considered suspect, and even insurrectionary. A key concept of legal and political thought thus shaped sixteenth-century literature, while this literature, in turn, transformed a legal-political concept into an evocative mytho-poetics. With this focus on the centrality of custom to Renaissance literary production, this book also questions the dominant understanding of the period as the birthplace of “historical consciousness.”

A second project looks at a range of inanimate objects that are central to women writers, from books to chairs, from objects that circulate within England to those that leave it. The project asks: how do these objects come to function, affectively and aesthetically, as inalienable possessions? How does women writers’ attention to the legal status of objects change our understanding of early modern global expansion? How do these objects, whether fictive or real, enable women writers to imagine alternative models of political and legal authority to those based in real property, or land?

Prof. Elsky has received fellowships for her research from the American Council of Learned Societies, Andrew W. Mellon Foundation, the Henry E. Huntington Library, and the Volkswagen Foundation.

“‘Wonne with Custome’: Conquest and Etymology in the Spenser-Harvey Correspondence and A View of the Present State of Ireland,” Spenser Studies XXVIII (2013) 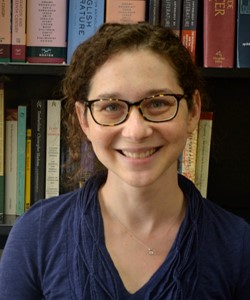