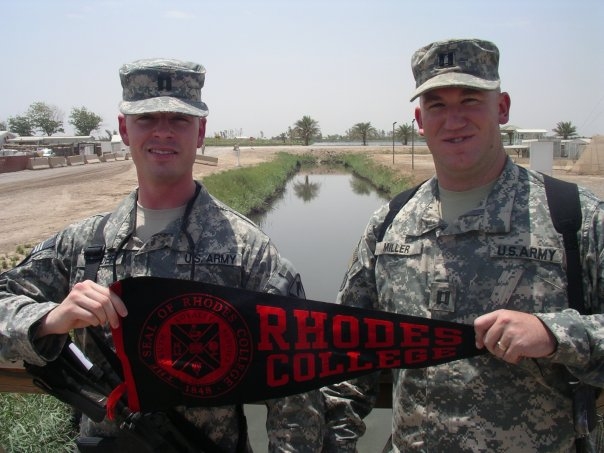 Rhodes classmates CPT. Matt Wilder ′02 (left) and CPT. Geoff Miller ′02 (right) raise the Rhodes banner in Baghdad in 2008. The Army officers were assigned to the same battalion during Operation Iraqi Freedom. As students, both men completed ROTC training together and were even roommates their senior year. Once commissioned, they took different paths--one in Air Defense Artillery, the other in Military Intellegence, but were reunited in Iraq. Matt kept the Rhodes pennant inside his body armor for good luck and it worked! He was never injured during his 27 months of combat.

Established on July 4, 2013, Red, Black and True is a chapter for Rhodes alumni who serve or have served in the armed forces. The chapter provides an opportunity for active-duty personnel to stay connected and engaged with the college and fellow military alumni who are frequently relocated to cities without permanent Rhodes chapters. In addition, the chapter will provide a means to connect current military alumni with former military alumni as they transition to civilian careers.

Efforts will also be made to document the military service of our alumni --both past & present -- with the aim of cataloging their achievements in order to tell the story of "I am Rhodes" from a military perspective.

Future goals of the chapter include a special reunion at Homecoming for military alumni as well as possibly establishing a mentor program to pair young military members with their more experienced peers.

To verify your military service is reflected in your record, please contact the Alumni Relations Office at alumni@rhodes.edu.