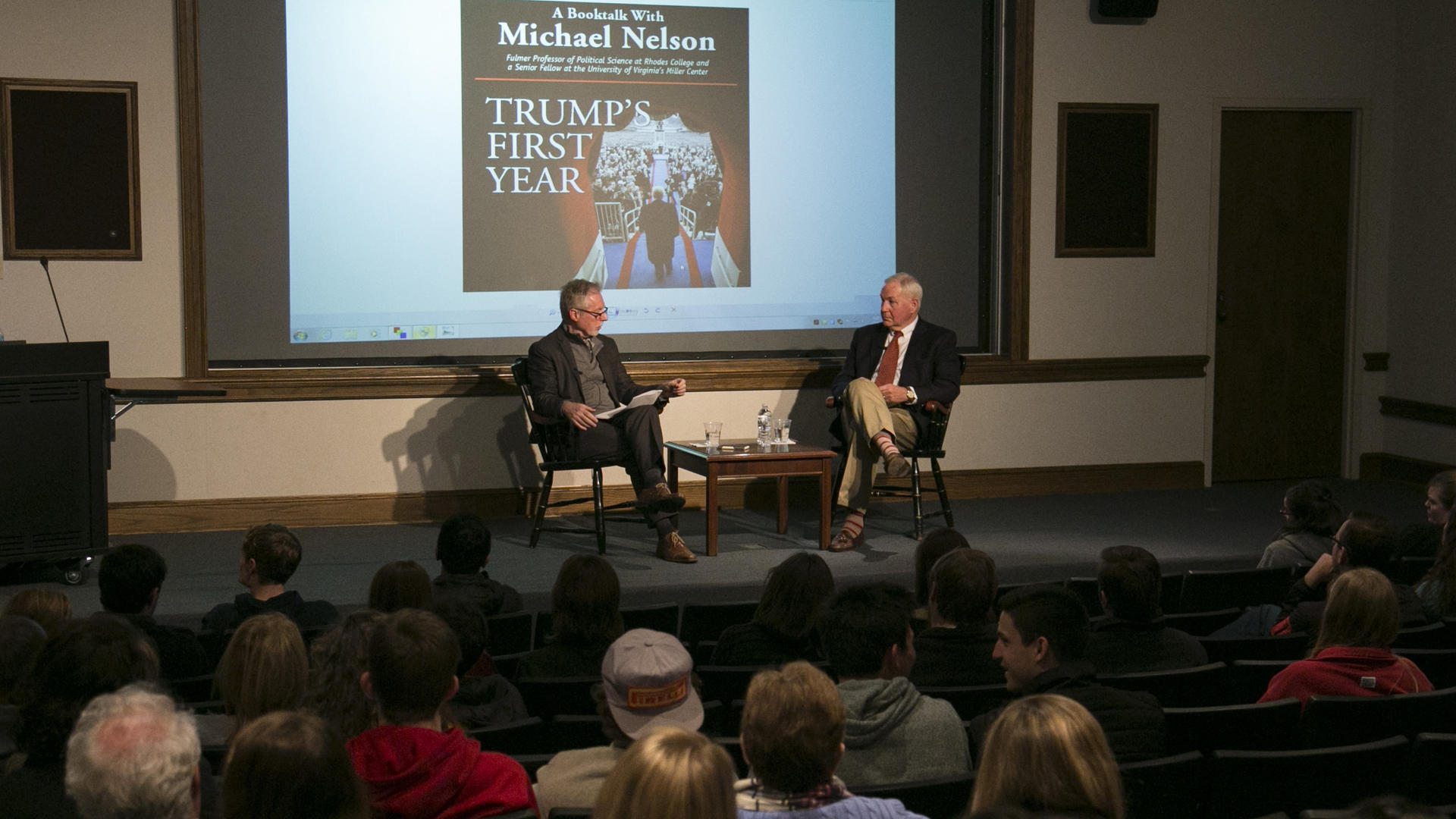 The Political Science Department is proud of its students, faculty, and alumni and their many accomplishments:

Prof. Ali Masood appeared on NPR Oct. 12 to preview the U.S. Senate hearings on the nomination of Judge Amy Coney Barrett '94 to the Supreme Court. Hear the full discussion.

On Oct. 14, 2020, Prof. Mike Nelson discussed his new book, Clinton's Elections: 1992, 1996, and the Birth of a New Era of Governance, with Russell Riley, co-chair of the Miller Center’s Presidential Oral History Program.

"Tracing Clinton’s place in American politics from his emergence as a potential nominee in 1988 to his role in political campaigns right up to 2016, Nelson draws a deft portrait of a savvy politician operating in the midst of divided government and making strategic moves to consolidate power and secure future victories. With its absorbing narrative and incisive analysis, his book makes sense of a watershed in the modern American political landscape—and lays bare the roots of our current era of political dysfunction."

On Oct. 13, 2020, Prof. Ali Masood presented on his research as part of the FDE series.  “Partisan Signaling and Asymmetric Support for Politically Insulated Institutions”

Non-electoral institutions, such as the U.S. Supreme Court and the federal bureaucracy, wield significant policy influence. However, unlike the elected branches of government, the public possess little information about these institutions. Given this informational vacuum, how do elected branches of government influence public perceptions of politically insulated institutions? This project explores how partisan cues from credible elites affect public perceptions of the U.S. Supreme Court, the Department of Justice, and the Federal Bureau of Investigation. I argue citizen perceptions of non-electoral actors and institutions are influenced by the president's partisanship as a key heuristic. Initial experiments using convenience samples through mTurk provided support for this argument. Subsequent nationally representative samples were employed to extend, replicate, and externally validate the findings. Broadly, the results demonstrate that partisan compatibility between citizens and the president is the key driver for support. These findings offer a richer understanding of the intricacies between political elites as source cues, party politics, and the malleable nature of support that permeates institutional boundaries. This project contributes to a broad literature on American institutions, law and courts, public behavior, political psychology, and experimental analysis.

In August 2020, Prof. Daniel Cullen reviewed the book Recovering America for the newsletter Law and Liberty. In the review, Cullen says that Coming Home shows that America suffers not from homesickness but homelessness--the alienation of a people from its true self.

In June 2020, Prof. Justin Rose published a review of Rethinking Racial Justice by Andrew Valls and Response to Andrew Valls’s Review of The Drum Major Instinct: Martin Luther King Jr.’s Theory of Political Service in the journal Perspectives on Politics.

In spring 2020, Prof. Anna Eldridge received the Tennessee Attorneys for Justice designation for the third year in a row.The TN Supreme Court recognizes attorneys who have completed at least 50 pro bono hours annually. To be considered for the designation, attorneys must deliver a substantial portion of legal services without fee or expectation of fee and delivery of legal services at no fee or at a substantially reduced fee to recognized groups and individuals, for the year prior to the announcement.

Prof. Erin Dolgoy has two chapters (along with Kimberly Hurd Hale) in the book Science Fiction and Political Philosophy: From Bacon to Black Mirror (Lexington Books, Feb 2020). The chapters are titled “Fiction and the Science of Self-Reflection: Francis Bacon’s New Atlantis and the Idols of the Mind” and "Founding a Posthuman Political Order in M. R. Carey’s The Girl with All the Gifts.”

In February 2020, Prof. Michael Nelson published his latest book, Clinton’s Elections: 1992, 1996, and the Birth of a New Era of Governance (Lawrence: University Press of Kansas, 2020). In the presidential elections of 1980, 1984, and 1988, the three Democratic nominees won an average of about 10 percent of the Electoral College vote—a smaller share than any party in any three consecutive presidential elections in US history. In the next seven elections, Democrats won the popular vote in all but one (2004), a feat not achieved by a political party since the Democratic Party’s inception in the 1820s. What separated these record-setting runs was the election and presidency of Bill Clinton, whose pivotal role in ushering in a new era of American politics—for better and for worse—this book explores.

In Oct. 2019, students in Prof. Ali Masood’s class on judicial politics were part of a small group who met with Supreme Court Justice Stephen Breyer prior to his Constitution Day lecture at Rhodes. Besides answering questions directly related to their coursework, Justice Breyer’s conversation included a behind-the-scenes look at decisions handed out by the Supreme Court. More about Justice Breyer’s visit

Prof. Daniel Cullen, a Senior Fellow of the Jack Miller Center (JMC), sat down in Oct. 2019 with JMC board member Wilfred McClay to discuss McClay's new textbook, Land of Hope: An Invitation to the Great American Experience. Listen to the interview

In fall 2019, Prof. Ali Masood published, “The Aggregate Dynamics of Lower Court Responses to the U.S. Supreme Court” in the Journal of Law and Courts. In June 2019, he published “United Kingdom, United Courts? Hierarchical Interactions and Attention to Precedent in the British Judiciary,” in Political Science Quarterly. And, in February of 2020 he published “The Sum of its Parts: How Supreme Court Justices Disparately Shape Attention to their Opinions” in Social Science Quarterly.

Prof. Ali Masood was awarded a National  Science Foundation Grant in June, 2019, of $133,718 for a project titled "Dynamic Learning in Comparative Courts: A Cross-National Analysis of Judicial Decision Making in Canada, the United States, and the United Kingdom." This project develops, assesses, and advances a new and innovative theoretical framework on the dynamic transmission of information between two tiers of courts across the judiciaries of Canada, the United States, and the United Kingdom. This study represents the first comprehensive assessment of hierarchical influences on judicial decision making within a comparative context. The comparative focus of this project presents scholars, policymakers, and practitioners with exciting, innovative, and new opportunities to explore how ideological and institutional differences within judicial systems and different tiers of the judiciary can influence decision making. This project also contributes to a broader understanding of courts in a comparative context by illustrating that scholars cannot easily assume that frameworks developed for American courts are automatically transportable to other countries. Beyond contributions to the academic sphere, the proposed project has broad policy and social impacts. Understanding how judges behave in this dynamic decision making process is necessary for understanding how law and policy is developed and how institutional designs seemingly condition judicial decision-making behavior.

Prof. Mark Pohlmann published on opinion piece in The Hill on Nov. 1, 2017, on the tax reform being proposed in Congress. Titled "GOP's tax reform is a 'middle-class con job,' " the full article can be read here.

In an interview with Chapter 16, Prof. Michael Nelson discussed his book Resilient America, which is about the turbulent election of 1968, the parallels of that election to recent events, and the lessons that apply to the election of 2016. The full interview can be read here.

Daniel Klinghard '96 has co-authored a book, Thomas Jefferson and the Science of Republican Government: A Political Biography of Notes on the State of Virginia, available on Amazon.

Prof. Daniel Cullen will take part in a panel discussion on April 3, 2017, at the upcoming event at Princeton University, The Achievements of Sir Roger Scruton, sponsored by the James Madison Program in American Ideals and Institutions. The panel will be followed by a lecture by Sir Roger Scruton, "Philosophy in the Public Culture."