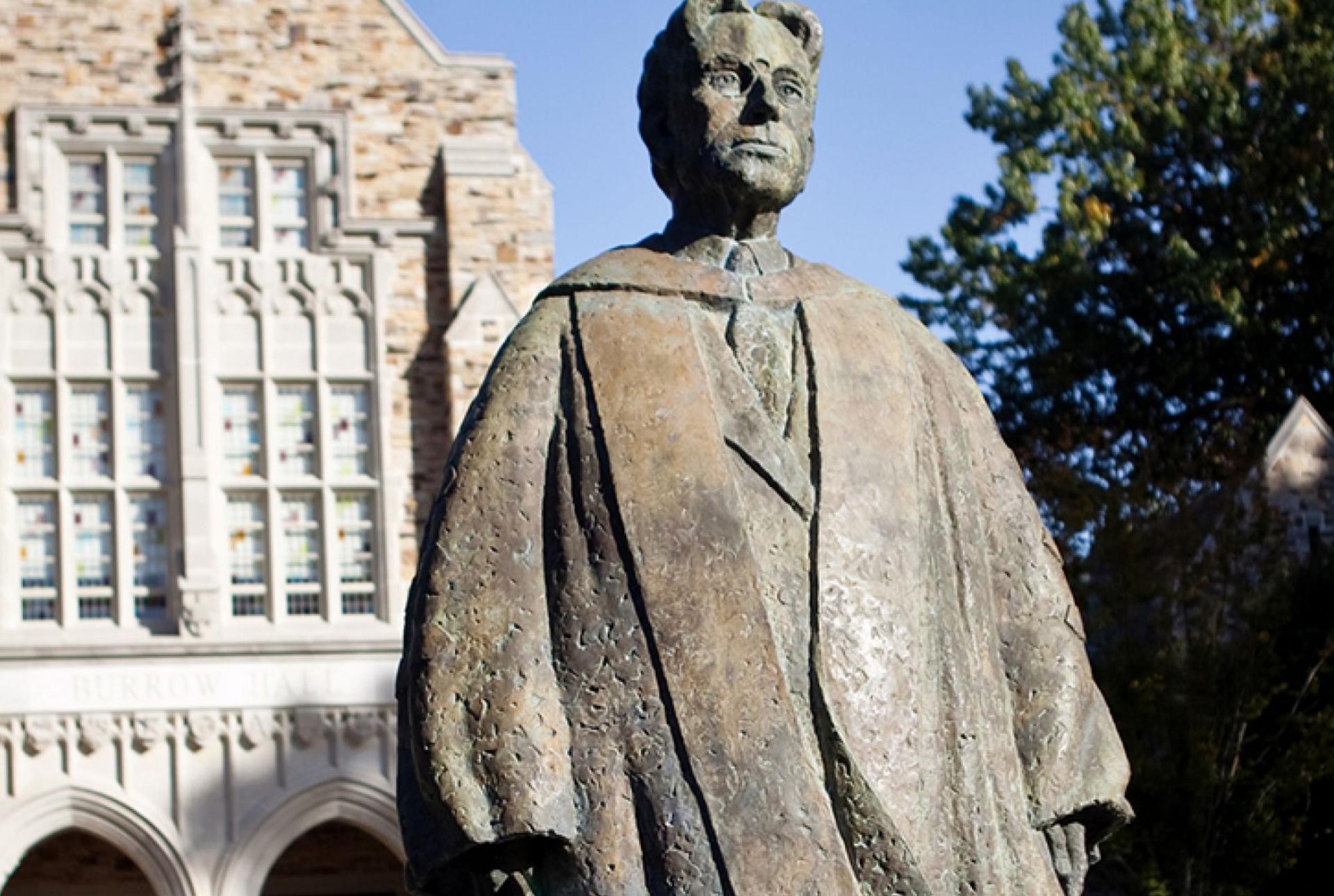 Ari Eisenberg was selected by students to win Rhodes Campus Life’s Inaugural Accessibility Ally of the Year in April 2019.

At the Annual Awards Convocation, the Department presented awards to the following students:

Other History student winners recognized at the Ceremony:

At the Rhodes Symposium, student editors India Nikotich ‘19 and Sarah Eiland ‘20 debuted the newest issues of the Rhodes Historical Review.  Authors were present to discuss their research.

History majors Maddie Kuenzli ’19 and Junior Walters ’19 were invited to join the Phi Beta Kappa honor society.  Chandler Hall ’20 was inducted to PBK this year as a junior.

History major Sarah Eiland ’20 participated in the Rhodes Institute for Regional Studies in Summer 2018 with her project “The Exploitation of Female Slaves in the Urban Deep South.”

History major Matthew Broussard ’20 competed as part of Rhodes A in the final round at the American Mock Trial Association’s National Championship Tournament, earning the status of All-American Attorney.

History major Natalie Manoogian ’21 competed as part of Rhodes B at the American Mock Trial Association’s National Championship Tournament, which is now the highest ranked B team in the country.

History major Cody Stockton ’19 was accepted into Dartmouth’s Tuck School of Business Bridge Program, where he will be attending shortly after graduation.

Check out the new article by History Prof. Samson Ndanyi titled "How young filmmakers Are Protecting Artistic Freedom in Kenya."

Listen to Rhodes History Prof. Jeff Jackson's interview on CBC Radio about the history of Paris and urban development.

Congratulations to History Professor Emerita Dee Garceau and her students whose documentary film "A Massacre in Memphis" won awards at Indie Memphis and elsewhere.

Learn more about the roundtable on rethinking anti-Semitism published in the American Historical Review, the premiere journal in the field, edited by Rhodes History Prof. Jonathan Judaken.

A new documentary film tells the story of efforts by Rhodes History Prof. Tim Huebner and his students to put a marker on the site of a slave market in downtown Memphis.

Congrats to the winners of our 2018 History Department awards at the College’s Awards Convocation: Jessica Shainker, ZongFang Li, Maddie Kellas, and Natalie Manoogian.

Congratulations to Prof. Tim Huebner for being selected Outstanding Professor by the Rhodes College newspaper, the Sou'wester

Listen to History Prof. Charles McKinney talking about the legacy of MLK on WNYC's "The Takeaway."

History Prof. Charles McKinney was on WBUR-FM's "On Point" talking about the legacy of Martin Luther King.

Read History Prof. Tim Huebner's essay about honoring the legacy of Martin Luther King and the new monument to the slaves sold by Nathan Bedford Forrest in Memphis at The Hill.com.

Prof. Charles McKinney Has New Book Out on Black Freedom Struggle In Memphis

Read Prof. Robert Saxe's op-ed on TheHill.com for the historical context of gun violence and legislation in the US.

Prof. Hannah Barker has published a chapter in an edited collection: “Christianities in Conflict: The Black Sea as a Genoese Slaving Zone in the Later Middle Ages,” in Slaving Zones: Cultural Identities, Ideologies, and Institutions in the Evolution of Global Slavery, ed. Jeff Fynn-Paul and Damian Alan Pargas.

Prof. Jonathan Judaken has published two new pieces:  "Ten Commandments for Thinking About Modern Anti-Semitism" on Forward.com and “Heidegger’s Shadow: Levinas, Arendt, and the Magician from Messkirch,” in The Routledge Companion to Philosophy of Race.

Read Prof. Tim Huebner's essay in the Commercial Appeal about his and his students' efforts to tell the whole story behind local slave trader Nathan Bedford Forrest.

Prof. Seok-Won Lee has published an article titled “Kiyoshi Karl Kawakami and Japanese America between the Two World Wars” has appeared in the journal Japanese Studies.

Prof. Charles Hughes is quoted in a recent Rolling Stone article about the racial politics of Americana music. He has previously spoken about this topic at Rhodes and elsewhere, and he addresses the history behind this contemporary issue in his book Country Soul.

Prof. Mike LaRosa co-authored an op-ed essay for The Commercial Appeal about the pardon of Sheriff Joe Arpaio.

Prof. Robert Saxe is quoted in an article on the New Republic website about experiences of World War II veterans after they returned to America.

Prof. Jeff Jackson published an essay in The Hill on the events in Charlottesville and why history matters.

Prof. Etty Terem’s article “Navigating Modernity: Lessons in Government and Statecraft in Precolonial Morocco” has appeared in the journal Mediterranean Studies, an international, peer-reviewed journal particularlyconcerned with the ideas and ideals of Mediterranean cultures from antiquity to the present and the influence of these ideas beyond the region's geographical boundaries. Prof. Terem's article is part of a special issue on non-state agency in Mediterranean politics.

Prof. LaRosa has co-authored a new op-ed in the Commercial Appeal about US policy in Latin America.  Check it out here.

Rhodes History majors Brad Bierdz and Cameron Sandlin were instrumental in helping to recover the history of the LGBTQ community in Memphis.  Read thestory in the High Ground News here.

Congratulations to Rhodes history major Jackson Lourie '17 on being drafted by the Atlanta Braves.  For the full story click here.

Alumni news from Katie Jakovich '16:
I graduated May of 2016 from Rhodes with my degree in history, and I started graduate school January of 2017 at the University of Texas at Austin's School of Information to earn my Master of Science in Information Studies. I was informed last week that I was selected by the School of Information to receive one of their 2017-2018 Endowed Presidential Scholarships. They only give out about 10 of these scholarships a year. I believe that I am in this incredible position of being at my dream graduate school and receiving this scholarship at least partly due to the amazing History Department at Rhodes. The professors at Rhodes were so supportive, and continue to be, and taught me so much not only about history, but also about how to be the best writer, student, and person I could be. So thank you so much... to every professor in the Department with whom I ever took a class - you truly are making dreams come true.

Dr. Michael LaRosa published a commentary about Colombia in the May 25, 2017 issue of the Memphis Flyer titled “Twenty Years On.” The article was written with Paul J. Angelo,  a Ph.D. candidate at University College, London.

Dr. Tait Keller has recieved a three month fellowship for Summer 2017 at the Rachel Carson Center in Munich, Germany. The Carson Center is one of the most prestigious centers for environmental studies in Europe.

Congratulations to the authors of the 2017 edition of the Rhodes Historical Review:  Roz KennyBirch, Nathaniel Plemons, Dominik Booth and Claire Carr

Congratulations to Prof. Robert Saxe for winning the Mortar Board Faculty Award for 2017.

Dr. Jonathan Judaken was part of a plenary discussion at the Society for French Historical Studies (the largest conference in the United States for scholars of France) titled, "French Historians in the Public Sphere."

Dr. Tait Keller, associate professor of history at Rhodes, has been awarded a fellowship from the American Council of Learned Societies for the fall of 2017 to work on his research titled “Green and Grim: A Global Environmental History of the First World War.”